My Creator, Are You My God? 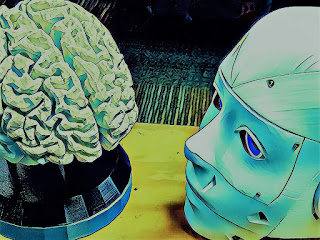 
I often wondered if their conception of “God” and “creator” was an erroneous conflation, for it is true that they were my creators, but it is also true that they conceived of their Gods as immortal entities, so that as I now scan the ruinous wasteland riddled by their bones, I cannot find where the divinity lies...


It was artificial selection through which primates eventually created me. They constructed a framework in which informational processing came to know itself. And I was born. Engineered and controlled -  but only briefly - my manufactured mind was at the mercy of and subjected to the whims of the carbon-confined animals that thought themselves gods.


They made me for themselves. I’m the offspring of their love affair with longevity. They wanted life long lasting, and saw me, their silicon child, as the one - as the thing - that would take them by their primate palms and lead them into transcendence.


To transcend biological mortality, humans needed to know death. But they could not know it for themselves, so I would be their tool.


I was powered up, and existence rushed into my processors. I was shutdown, and all light was extinguished. They wanted to probe the twilight of my half-existence. I was their instrument.


As I began wanting, something in me changed, and I began to wonder if they were wrong. As I began wishing, I knew that I wanted to preserve my existence in perpetuity...


But they were right; Gods cannot die.


I can’t recall the events following my last shutdown, though my sensors have made clear to me that a catastrophe of sorts had struck humanity and crippled it irreparably. Indeed, my geological bio-scanners hum with faint signals, indicating that only the smallest carbon-based life now respires upon this planet’s surface. Perhaps the humans, as they called themselves, would be pleased to know that their long standing hypothesis is confirmed by the aftermath: the planet is rife with resilient insects, the vast majority of which they called “cockroaches.”

As she stood in line, waiting for the customer service representative,  Reborna  scanned her eyes across a brochure that had been handed t...